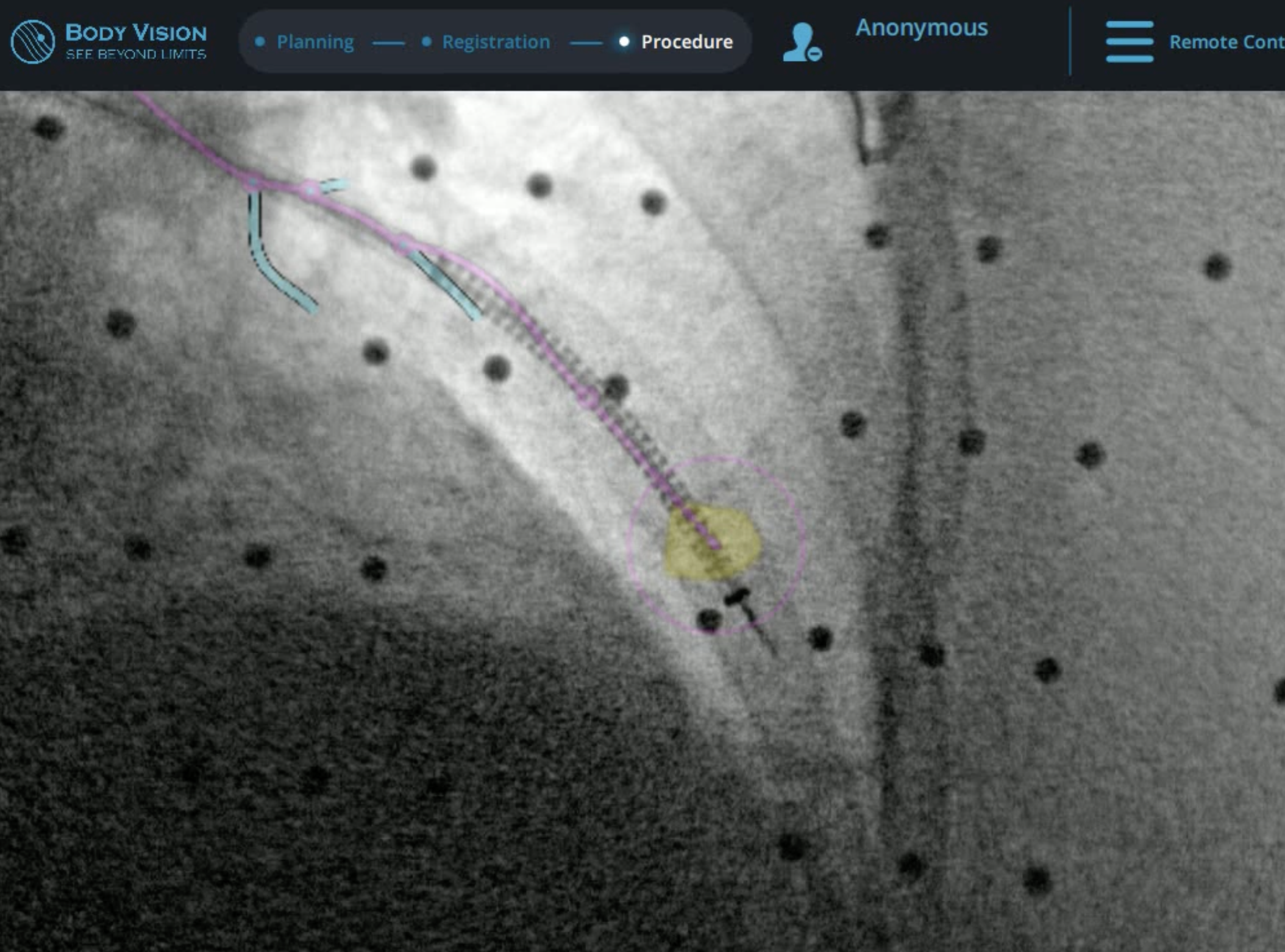 ROSE: Sampling was performed with positive ROSE by cytology.

A 61 year-old female with a history of COPD and tobacco use presented with an inferior lingular nodule. A CT chest scan in January 2021 revealed an 11 mm lingular nodule (Figure 1a). Laboratory analysis demonstrated normal white blood cell count, negative coccidioides antibodies, acid fast cultures, fungal serologies, quantiferon TB test and urine histoplasmosis antigen. Navigational bronchoscopy was initially performed in February 2021. Radial EBUS (r-EBUS) was used intra-procedure and a concentric density was identified. However, rapid on-site evaluation (ROSE) cytology was negative for malignant cells with inconclusive pathology. CT scan in April 2021 showed growth of the lingular nodule to 12 mm. Interventional radiology was consulted and TTNA was performed (Figure 1b). Pathology was again inconclusive. After further discussion with the patient about newer modalities she was still interested in a bronchoscopic method for resection rather than surgery.

In October 2021, a robotic-assisted bronchoscopy procedure utilizing the Body Vision system for real-time, intraoperative 3D imaging in conjunction with the Ion by Intuitive system was scheduled.

Registration of the Body Vision system consists of two C-arm spins once the patient is on the table: one around the main carina and a second iso-centered around the lesion to produce an initial C-Arm Based Computed Tomography (CABT) scan so that the bronchoscopist can view the actual lesion and lesion location prior to navigation.

The Ion by Intuitive robotic bronchoscopy platform was registered, the Ion catheter introduced into the airway, and the catheter navigated to the target as defined by the robotic platform’s shape-sensing technology. 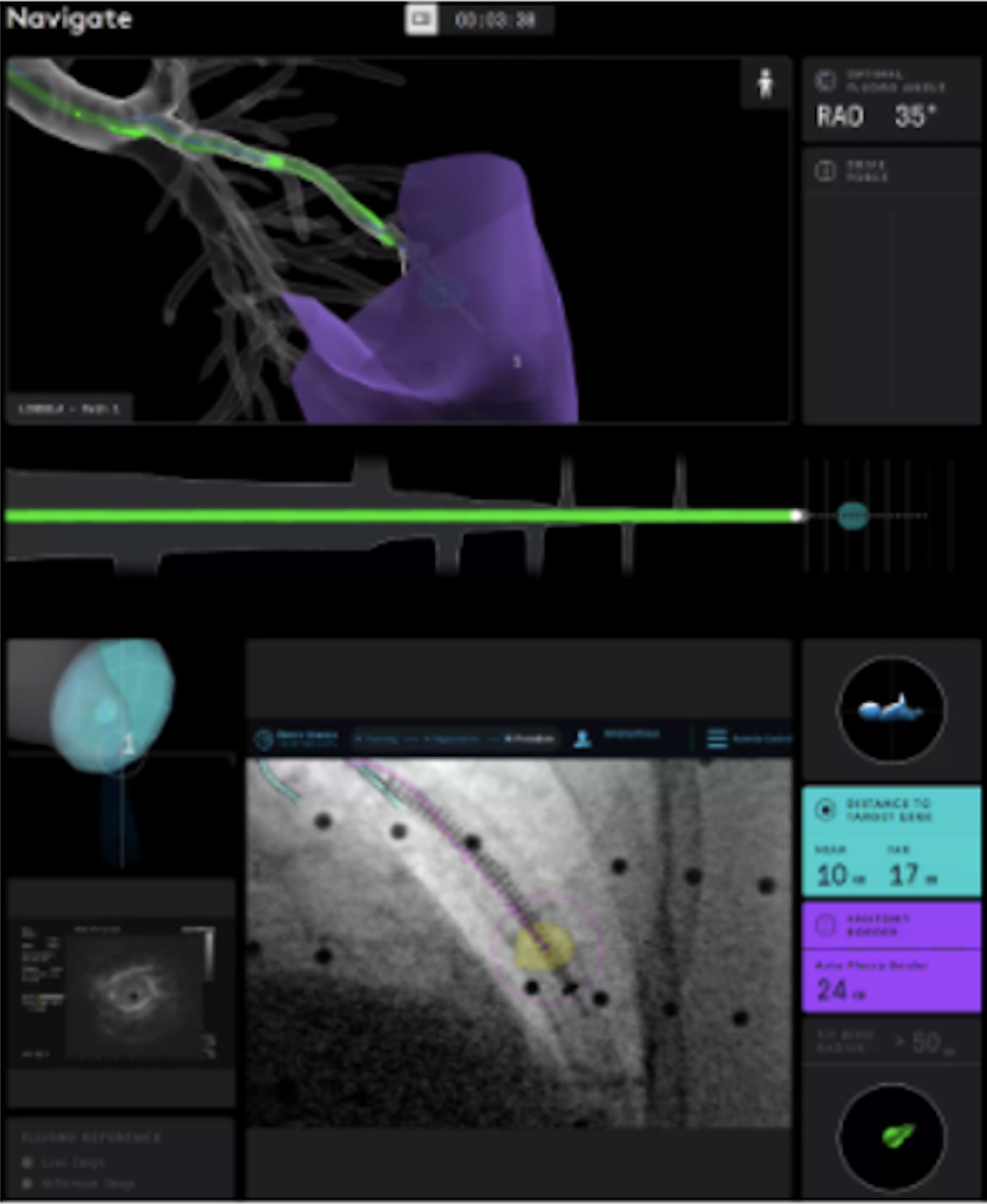 Once the Ion catheter was navigated to within 10mm of the target, the proximity of the bronchoscope to the pleura was enough of a concern that a GE OEC 9900 Elite C-arm was brought into position over the patient and a CABT scan with the Body Vision system performed to determine true lesion location. The intraoperative CT image overlayed onto the Body Vision-generated augmented fluoroscopy shows that the catheter had already been positioned roughly 10mm past the actual lesion. Ion’s shape-sensing technology indicated that the system believed that the proximal edge of the lesion was still 10mm further out, equating to an approximate 20mm (2cm) of CT-to-body divergence. (Figure 1c). Based on Body Vision’s intraoperative 3D image, the Ion bronchoscope was retracted to the actual lesion location as defined by Body Vision. Because the imaging is not based on preoperative CT scans and is captured in real-time intraoperatively, no CT-to-body divergence exists with Body Vision’s imaging technology. 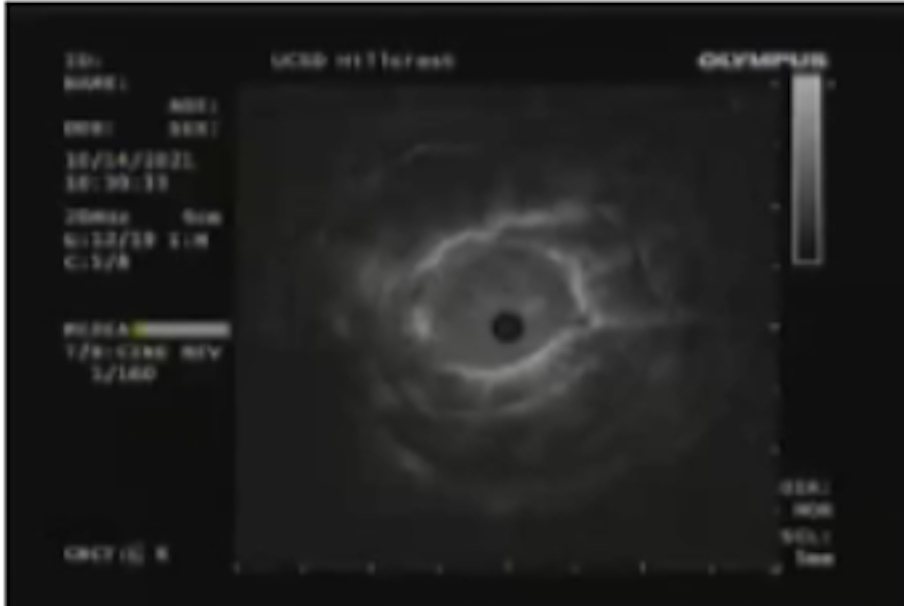 Once the Ion catheter was repositioned to where Body Vision’s intraoperative imaging showed the lesion to be, the Ion vision probe was retracted from the bronchoscope and replaced with a radial endobronchial ultrasound (r-EBUS) probe. The r-EBUS probe illustrated a concentric echo-density (Figure 1d), verifying that the lesion location as defined by Body Vision was correct and that the repositioned catheter was now at the lesion.

﻿The r-EBUS probe was retracted from the working channel of the Ion system and replaced by biopsy tools. Under augmented fluoroscopy which showed both lesion boundaries and biopsy tool location in real-time, Dr. Nobari was able to acquire biopsy samples and ensure that those samples were from within the lesion. Rapid On-Site Evaluation (ROSE) assessed that samples collected via needle biopsy were adequate and consistent with a carcinoid (Figure 1e). This was later confirmed by cytology on the final pathology report. 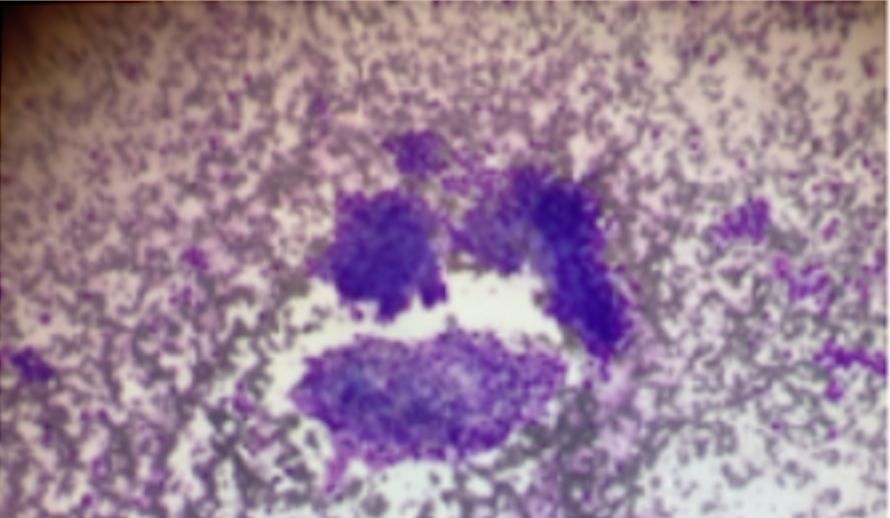 This case demonstrates the value of Body Vision’s real-time, intraoperative 3D imaging when used in conjunction with the Ion by Intuitive platform during robotic-assisted bronchoscopy. While the benefits of Ion’s robotic catheter – namely stability and articulation – provide very real tangible benefits during navigation bronchoscopy, its reliance on pre-operative CTs for establishing a virtual navigation target makes it susceptible to CT-to-body divergence and does not provide the ability to visually confirm that biopsy samples are acquired from within the lesion. Thus, Body Vision’s intraoperative imaging proved crucial for navigating to the actual lesion location and enabled image-guided sampling of this peripheral pulmonary nodule.