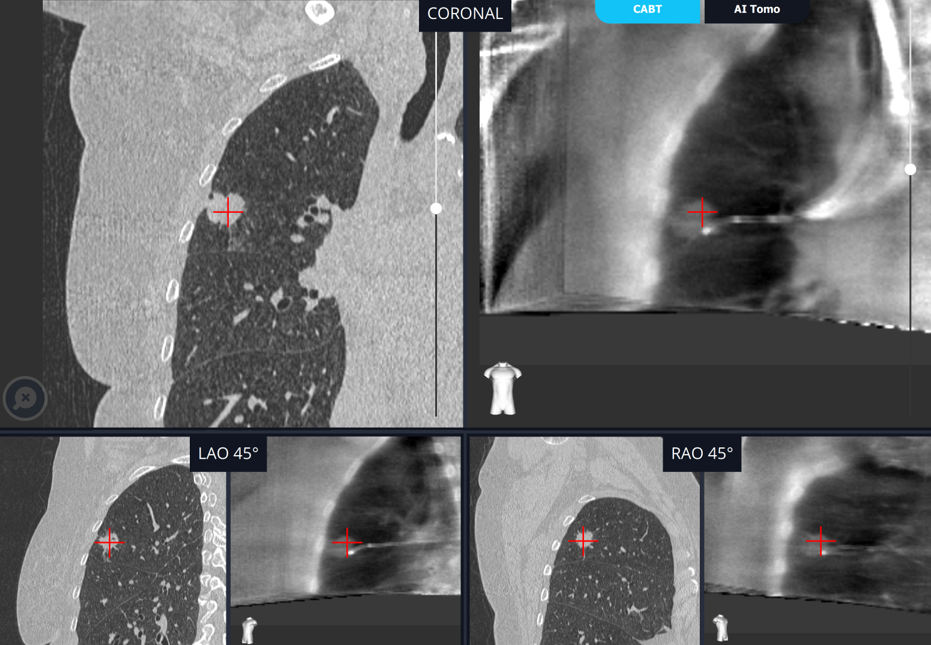 As a pioneer in the field of Navigation Bronchoscopy since 2013, I spent the big majority of my career leading the development of electromagnetic navigation bronchoscopy (ENB). At one point, ENB represented a major advancement in pulmonary medicine, however, gradually I recognized its limitations and knew we needed to take a wholly different approach if we were to address the fundamental challenge of enabling reliable, minimally-invasive diagnosis of small pulmonary nodules. This was why I founded Body Vision Medical.

From day one, I was certain that we wouldn’t use electromagnetic sensing because of its limitations, including the well-known, CT-to-Body divergence problem. If we wanted to solve this deficiency, designing a MedTech that would be easy for doctors to adopt and preferably based on some real-time technology they were already using was critical. In our case, this meant conventional fluoroscopy.

This was not a trivial task because part of the solution we contemplated was, ultimately, implementing computational tomography algorithms to run on a conventional C-arm. While this is possible in theory, since the C-arm is an x-ray device similar to a CT scanner and has the ability to rotate and take multiple 2D x-ray images from multiple angles that are a prerequisite for tomographic imaging, we had to overcome the fact that a C-arm is an inherently less precise device than an actual CT scanner. Also, many different C-Arm models exist on the market, each very different from the other. Luckily, Body Vision had (and continues to have) a very talented R&D team that is skilled to invent and develop a revolutionary hardware-agnostic technology that not only overcame this significant technical challenge but, because the solution was artificial intelligence (AI)-driven, laid the foundation for a system that could continue to improve accuracy and tomographic imaging quality as we fed it additional clinical data.

Once we developed the technology for tomographically visualizing radiolucent lesions with a conventional C-arm, which we dubbed C-Arm-Based Tomography, or CABT for short, the question was how best to present this data to bronchoscopists to be of greatest use to them during a diagnostic endobronchial procedure. The decision was to show the CABT images juxtaposed to the pre-operative CTs. This was so physicians had the ability to reference the preoperative plan and confirm the relationship between the lesion and the tool in multiple planes for true visual tool-in-lesion confirmation while also injecting it through augmented fluoroscopy to assist with real-time navigation to the tumor and to visualize tool-in-lesion in real-time prior to and during biopsy.

While the concept of augmented fluoroscopy is nothing new, the innovation that our technology introduces is that the augmentation is done with actual lesion location as captured by real-time CABT imaging while the patient is on the table, rather than images derived from the pre-operative CT. For this reason, unlike other forms of augmented fluoroscopy and navigational systems, Body Vision’s solution doesn’t suffer from CT-to-body divergence. This was a seemingly elegant solution, but one that required many years of research and collaborative development with pulmonary clinicians to achieve.

The resulting solution we developed, which we have branded as LungVision™, merges the 3D imaging capability of intraoperative computational tomography (CT) with real-time imaging of fluoroscopy, providing visual tool-in-lesion confirmation similar to cone-beam CT (CBCT) to enable reliable, accurate, real-time imaging of both lesion and tools during a diagnostic endobronchial procedure. These are characteristics that ENB and all other navigation technologies, up until this point, lacked. That this can be accomplished with very little incremental equipment beyond a conventional C-arm, a ubiquitous and underutilized piece of imaging equipment readily accessible to every bronchoscopist is an absolute game-changer.

What Correlates with High Diagnostic Yield?

Now in 2021, our complete solution is deployed to many hospitals, and it works like what I envisioned in 2014. We have a real-time system that enables navigation in a very familiar and usable fashion for physicians. We can provide visual, tool-in-lesion confirmation at any time including the most critical moments: prior to and during when clinicians want to get tissue from the lesion. Our users have also proven the obvious: Body Vision’s 3D tool-in-lesion confirmation is highly correlated to diagnostic success.

For decades, the actual lung lesion location, when the patient was on the table, remained an unresolved mystery. Historically, physicians used localization as the indicator of a successful procedure. This assumption became gradually invalid and was a byproduct of the fact that, until Body Vision recently provided the ability to visualize a pulmonary lesion intraoperatively in real-time, the only metric that clinicians could measure was their ability to navigate towards the estimated lesion location according to the pre-operative CT (called “localization”). Through multiple clinical studies, we’ve seen high localization with low diagnostic yield, demonstrating that the ability to see and navigate to a virtual lesion does not correlate at all to high diagnostic yield.

The legitimate question to ask, then, is what does correlate to high diagnostic yield? The answer is straightforward and based on past clinical experience. Thorough clinical studies have demonstrated that when a physician can confirm that his/her biopsy tool is inside the lesion just before taking a biopsy, as in the case of CT-guided biopsy, that leads to a high diagnostic yield, above 90%. This holds true regardless of the size of the lesion.

We continue to analyze the clinical results of doctors using our system and have seen a strong correlation between visual, tool-in-lesion confirmation under CABT and high diagnostic yield.

Before Body Vision, the way physicians worked was different. They were used to electromagnetic systems that didn’t provide accurate lesion location but were only able to estimate and bring them to the area of interest, which is in the vicinity of, but often much bigger than the lesion itself. From there, the strategy was to systematically sample from a wide area, a technique sometimes called “cloud biopsy,” to maximize the likelihood that the clinician could achieve tissue adequacy for pathology from the lesion.

Body Vision enables physicians to fundamentally change their approach to diagnostic bronchoscopy. They no longer need to biopsy from a broad area of the lung, only from a concentrated focal area where they know the lesion is based on intraoperative imaging. LungVision™ is the only navigation system that enables this evidence-based biopsy because it is the only system that provides real-time, intraoperative tomographic images of the lesion and the ability to visually confirm tool-in-lesion prior to and during biopsy.

The Future at Body Vision

As we look forward, we will continue to improve the usability of our system. We recently completed a learning curve study with several doctors and learned that it takes less than 10 procedures to become proficient at using LungVision™ independently without support from us. But that doesn’t mean that there isn’t room to further refine the user experience and increase the robustness of our customer training paradigm such that they achieve autonomy even sooner than they do today. We also plan to advance our imaging quality beyond where it is today and as mentioned earlier, the AI-driven algorithm that is at the heart of the Body Vision system provides us the ability to continuously make improvements on this front. This will be necessary to continue our journey into minimally invasive therapy.