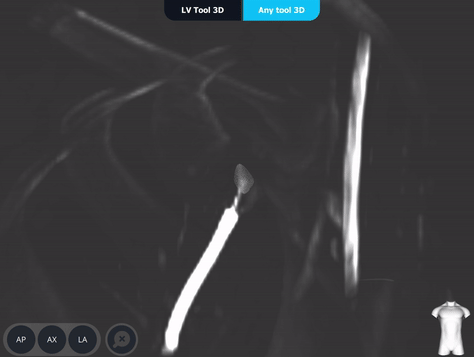 Biopsy and Diagnosis of a 12mm Lesion in the Right Upper Lobe
Body Vision Medical - September 20, 2022

Visible on Fluoro: No

ROSE: Sampling was performed and was positive for non-small cell lung cancer (NSCLC)

Final Pathology Report: Final pathology was adenocarcinoma of the lung

A 69 year-old asymptomatic, current smoker with COPD underwent a routine CT screening where a suspicious nodule was found in the right upper lobe (RUL). A PET scan of the 12 mm RUL nodule confirmed hyper-metabolic activity. A robotic-assisted navigation bronchoscopy procedure using the Auris Monarch platform in conjunction with Body Vision's AI-driven intraoperative imaging was scheduled to biopsy the nodule.

Once the patient is on the table, Body Vision registration consists of two C-arm spins: one around the main carina and a second iso-centered on the lesion. This produces an initial C-Arm Based Computed Tomography (CABT) scan to confirm actual lesion and lesion location prior to navigation. Once this is complete, registration of the navigation platform of choice, in this case, the Auris Monarch, is performed.

A GE OEC 9900 Elite C-arm was brought into position over the patient and a CABT scan with the Body Vision system was performed to determine true lesion location. The intraoperative CT image overlaid onto the Body Vision-generated augmented fluoroscopy enabled repositioning of the robotic bronchoscope. Because Body Vision’s imaging is not based on preoperative CT scans and is captured in real-time intraoperatively, no CT-to-body divergence exists. 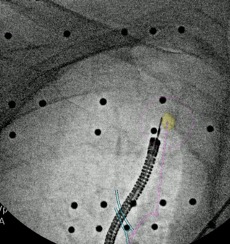 Using Body Vision’s fluoroscopy augmented with lesion location as visualized on the most recent C-arm spin for real-time, intraoperative guidance, the Auris Monarch robotic bronchoscope was repositioned to the actual lesion location. 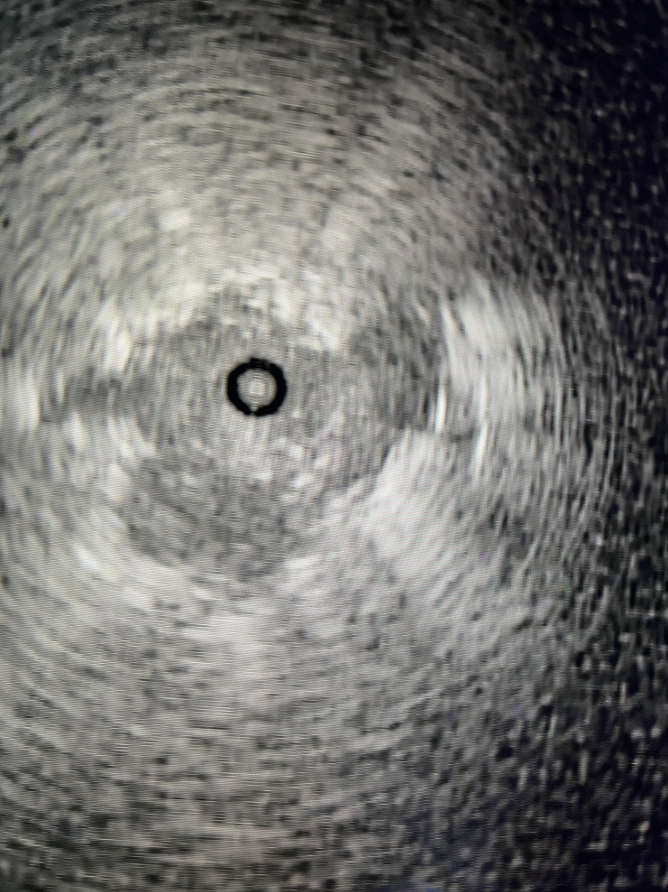 The r-EBUS probe was retracted from the Monarch working channel and replaced with biopsy forceps which were extended into the pulmonary lesion as visualized with Body Vision and verified by r-EBUS. Another C-arm spin was performed with the biopsy forceps extended in order to provide visual confirmation of tool-in-lesion in multiple 3D planes before biopsy.

Body Vision’s AI-driven imaging enabled a C-arm to produce real-time intraoperative scans that visualize the lesion, bronchoscope, and biopsy tools for tool-in-lesion confirmation prior to biopsy.

After tool-in-lesion confirmation, biopsy commenced under real-time image guidance using Body Vision's augmented fluoroscopy to ensure that tissue sampling occurred from within the lesion. Rapid On-Site Evaluation (ROSE) assessed that samples collected were adequate and consistent with non-small cell lung cancer. This was later confirmed by cytology on the final pathology report which stated adenocarcinoma of the lung.

A fiducial marker was placed at this time. Due to poor lung function (FEV1 less than 800 cc's), this patient is not an operative candidate. EBUS performed at the end of bronchoscopy presented no evidence of hilar or mediastinal lymph node involvement. This patient is an excellent candidate for Cyberknife.

This case illustrates how Body Vision’s AI-driven, intraoperative imaging can be seamlessly incorporated into the generally-accepted diagnostic bronchoscopy workflow. While robotic assisted bronchoscopy lends added stability and articulation to navigation bronchoscopy, the lack of real-time, intraoperative 3D imaging prevents any potential correction should, as in this case, the virtual target provided by the Monarch’s EMN navigation system prove to be incorrect due to CT-to-body divergence or other factors.

Rather than resorting to systematic blind sampling of the lung with r-EBUS to find the lesion, Body Vision enabled visualization of the lesion and lesion location so that the bronchoscope could be repositioned to the actual lesion location. Once the bronchoscope was repositioned, Body Vision’s intraoperative imaging enabled visual tool-in-lesion confirmation to maximize likelihood that tissue samples obtained were from within the lesion. Real-time, intraoperative imaging transformed this case from one in which reliable sampling from within the pulmonary lesion seemed unlikely to one in which a definitive diagnosis of adenocarcinoma of the lung was obtained for this lung patient.